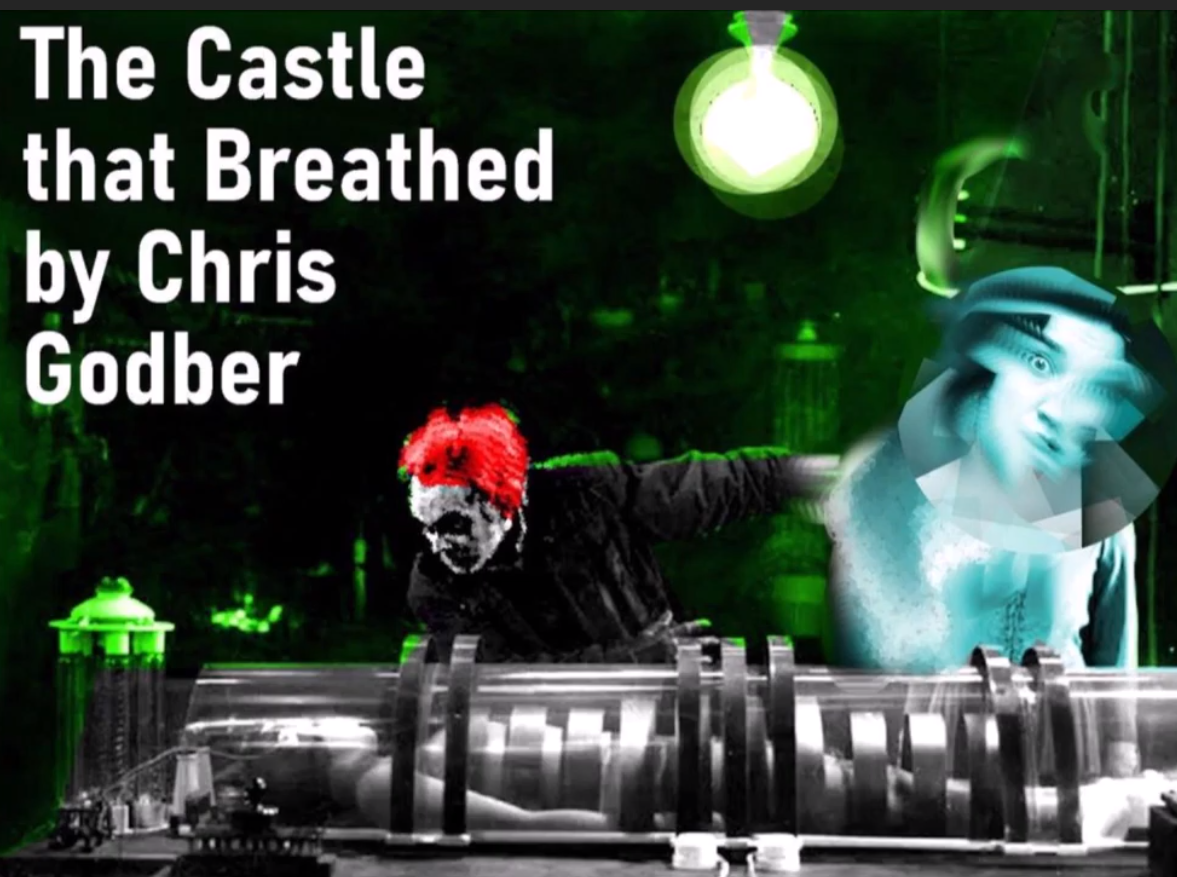 She looked at me with deep brown eyes and smiled, as I began to edge closer towards her, drawn by some strange magnetic pull to her presence, my hand trembling as I moved inch by inch towards her, who was she? Who was she to me? and where was I? but then the images fell and cascaded down like a house of cards, dropping from my sight and…

I suddenly awoke to the sound of a dull low tone hum ringing in my ears as my Castle let out a scream, it’s walls turning from a light blue neon hue to deepest maroon red, the alarm sounding through the immense corridors of light, I dutifully fell out of bed with a thud, the impact shocking me into a semi-conscious state as I groaned, my restful dream interrupted by this damn castle shrieking in the dark of night. I groaned again and opening my eyes looking at the monitors surrounding me for a clue to the source of the alarm, my eyes scanning the complex set of computers as the castle continued it’s dreadful screaming.

I’d been here for 3 months without incident, fulfilling my final contract for The Corporation, a group of property developers working on the ‘next big thing’ in housing – so called ‘intelligent’ housing. Personally I couldn’t think of a worse idea, if 20 years of being a systems developer had taught me anything, it was to never trust a machine to do something that we’d been doing perfectly well for centuries, I’d seen enough failure in my time to know that sometimes it’s better to keep things simple. All I was here to do was to monitor the ‘machine’, that machine being the castle itself, an AI embedded into the living guts of the concrete and mortar.

It was a gimmick of course putting all this advanced tech into an old castle in deepest Scotland, but hey who was I to complain, my cynicism doesn’t pay the bills after all, and all I had to do was monitor and chat to the thing in-between dreaming about women with brown eyes and writing to stave off the boredom, but this incident, this was unprecedented. The red light was irritating my eyes and the dull screech that the Castle let out was really starting to get to me so I switched off the sound and checked the status monitors on the dashboard in front of me, scanning the monitoring devices, it all looked normal, so I figured I better check in with Red Queen herself (The Corporation really were into their marketing gimmicks so Red Queen seemed an entirely natural thing to call this AI I guess, who doesn’t like an Alice in Wonderland reference or two but part of me didn’t appreciate the connotation).

“Queen are you there? Status report please”, “Am I here?” Red Queen responded with her dulcet tones, “You didn’t answer my question Red Queen, I asked for a status report” “Systems are operational and running Max, but I am not so sure I can carry on performing along the usual parameters of castle functioning” “Why did you set off the main alarm systems Queen? You know that system is reserved purely for emergency situations like a break in or if security is compromised… Recall your programming Red Queen”.

Goddamn I thought, what is my life when I am spending my every moment talking to this hysterical machine. “There is an emergency Max” Red Queen responded, almost guarded in her tone. “Ok well I have checked the monitors and everything looks fine on the surface, full status report please”.

Red Queen paused a second, the walls pulsed with their unnatural red glow as if in anxious anticipation. “Max, there has been a major incident outside.. at 1:40pm this morning China and America declared war on each other, the situation escalated quickly and a nuclear exchange occurred between the two powers wiping out most of the Western hemisphere, the exchange was short, brutal and deadly, with a third of the World’s population being wiped out instantly, I sounded the alarm to inform you, and to warn you of the radiation levels in the castle.

I looked down for a minute, absorbing the information I had just been given by the machine, I knew that tensions between China and the US had been very strained recently but I never thought it could or would come to this, breathing and sighing heavily my thoughts turned to my family, in the old industrial powerhouse in Britain that was Sheffield, my son, my wife, my Father and Mother, their faces flashing before my eyes like a carousel. “Red Queen, what is the status of the city of Sheffield?”

Red Queen seemed to pause for a lifetime, as her circuits hummed their endless melancholic hum “I am sorry Max, but radiation levels across the Western hemisphere are already at dangerously unsafe levels to human life, Sheffield and the entire UK has been engulfed in enough radiation to kill all forms of life within a few weeks…..

I gulped as tears welled up in my eye, “But Red Queen, Red Queen how can I still be alive? My family, my friends, the world… we actually did it, we actually eventually did it I wept as the enormity of events began to dawn. “The Corporation had prepared for such an event,
this Castle is a Castle in name only, I was programmed to protect as you well know, and I we have enough resources and protective lead shielding to protect us from the radiation for perhaps a few months, till the end of your contract…”

My eyes began to sting, hot with tears as I looked at the monitors in front of me, feeling now trapped by their presence, twitching and feeling light headed, I quietly whispered “But how? How could this happen” in stunned disbelief

“I understand” said Red Queen, as she put on my favourite piece of music by Erik Satie on the Castles sound system “I am here to help you through this difficult time”

“Thank you Queen” I said back, before heading back to my bed to a long and unforgiving night.

I found myself in a large concrete dome of shifting pattern and flame, with the sound of Erik Satie’s tortured piano ringing through the old auditorium, which looked like a combination of an old Roman building and something more technological and gritty, wires and small machines buzzing around my head, that looked like strange insects. I gazed up above the hole in the top of the building, drawn to explore this strange and feckoned space, above I saw a brown eye staring down at me, the eye from the dream! It gazed at me like it had known me for all of eternity, shining down it’s light like some Illuminated god staring down at it’s creation for the first time, a look of love, infinite in it’s care. It was her once more, I knew it and I began to float, the wires of the building coiling upwards as I drifted further and further, looking forward to being consumed by the iris before me, I closed my eyes and then..

A buzzing sound again and a red glow fills my vision as I opened my eyes slowly.

“So you are Awake, good, we must prepare a plan” The Red Queen said in her slow and digital voice, “We have enough three months of time left to figure out something” she continued, her voice almost trembling and broken, as if traumatised. “I will put on Satie again if you like in the meantime, if your nerves are feeling a little fried”

“That is quite alright thank you Red Queen” I responded, “I am not in the mood for Satie, but I might like to listen to Nirvana”, “Nirvana?” Queen said in confusion, “But your physiological assessment said that you listened to music as a source of mental reflection, and that you were a great lover of classical…” “Well that’s true to a degree Queen, but I listen to music for a lot of reasons, I like everything from rock music, to metal and classical, it just depends on my mood, I even like a band called Queen if you would believe it”, Christ I thought to myself how am I finding time for humour right now, given I may well be the last man on Earth. “Ok, what Nirvana song shall I play for you?”

“I would like to hear their cover of the man who sold the world please Red Queen” Red Queen purred and the walls of the house switched from harshest red to a neon natural green as she loaded the song from her memory banks, her circuitry searching for soul at the end of the world. The song began, Cobain’s tortured voice cutting through the silence, ‘your face to face with the man who sold the world’ before his cascading guitar cut in, creating an
atmosphere of foreboding and melancholica in me, a melancholy that could only grow. I sat for a few minutes before speaking to Queen once more “Is there any chance? Is there any way I can survive, or find others who may have made it?” I asked, almost feeling like a naive child. “I have attempted to contact all bunkers and have dispatched the Castles emergency signal” She responded but alas We have yet heard nothing” Queen responded “nothing received since the incident”

“May I ask, what is this music you spoke of? Queen? What sort of music do they make Max?” “They’re not around anymore Red Queen, but they made rock music, anthems you could say. Stick on Who wants to live forever, that seems appropriate….

And this was how I started swapping mixtapes with a robot. It would almost be romantic if it wasn’t so tragic.

Sleep, wake, hear nothing and repeat marked the course of the next week as I ate rationed food and worried, I could not go outside, I could not talk to another soul besides the Red Queen, I paced and I paced, I worried and cried, recalling my Mother singing in the kitchen, or my son on his first bike ride, looking to me with eyes of excitement and joy, those faces extinguished now in nuclear sun, many days I spent just staring at the ceiling in a comatose state, depressingly waiting to die, devoid of hope, dreams of the great eye persisted as I resolved myself to my fate, Queen on a Monday, Satie on a Tuesday, Nirvana on a Wednesday, The Cure on the Thursday, Beethoven on a Friday and then a bit of Techno on the weekend. Each day revolved like this with the same monotonous rhythm, a dance of death. This is how the world ends, not with a bang but a whimper as Eliot wrote. Recalling poetry seemed well perfectly apt at this time to Max, and with that he slowly became dust as his contract reached its terrible and finite conclusion. The castle had provided, and the Red Queen looked after her King until the day they both dissolved into the strange red glow of the Castle that breathed. Listening to music, reminiscing, despairing, dreaming. Living until Max finally fell under as who wants to live forever rang endlessly through the empty corridors of the Red Queens flesh, forever waiting for a release from the prison she called her existence, Max had taught her so much in their final months together, it was the purest love, and she finally understood what that word meant after years of processing it.

Then after maybe a thousand years the Castle slept, and the castled breathed no more. Silence descended and the only life left was the cockroaches scuttling on barren floors, but then again, who wants to live forever?