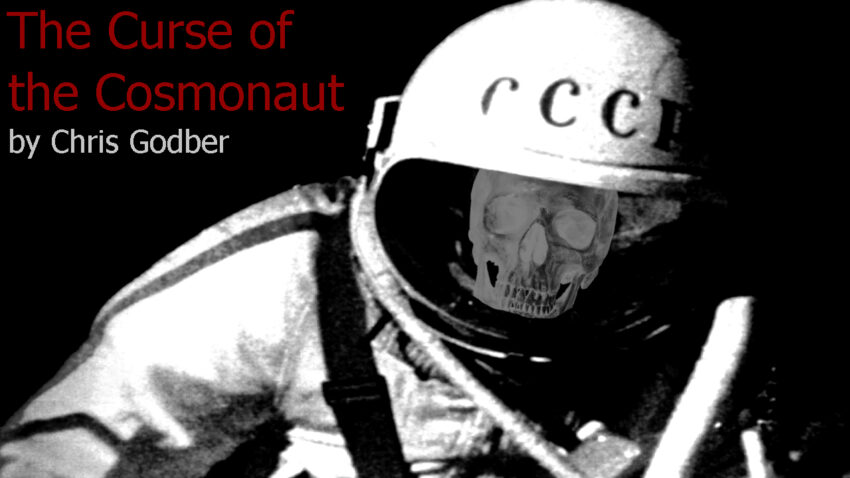 It was the year 2190, and in the deep endless expanse of the cosmos something stirred within the shattered husk of the hull of what was once the International Space Station, orbiting needlessly and without purpose above the Earth, the humans below and above having long ago driven each other to mutually assured destruction, annihilating each other in nuclear flame, till only a battered, empty husk remained, charred and barren of life.

Yet still something stirred above, echoing through the corridors of this monument to man, an old weary beady eye blinking slowly, and with great intensity surveying  the broken hull of the space station. Of what possibly could have survived in such a hostile environment, blinking in the long dead remains of the ISS, we shall discover, as we unveil a fate more horrible than death itself –  the curse of the cosmonaut…..

Ivan had always had a fascination with space that had existed as long as he could remember, perhaps it was a science class that drew him to it, perhaps an old showreel of Yuri Gagarin he had seen, or maybe even something as simple as looking out his window on a cold winter’s night and stargazing, but whatever it was, he knew he had always been drawn to them, entranced by their cosmic siren’s song. His family thought him a dreamer of course, and his older brother Sasha would bully him constantly, call him a feckless wanderer, a daydreamer, and worst of all perhaps – a nerd, one of whom was sure to never attract a woman to his side, but to Ivan he was above their insults, and teasing, knowing somehow that his destiny but somehow be found, not below, in the cold shivering streets of Moscow, but above, perhaps in some palace in the stars, some unknown vista he could scarcely imagine. He pursued his dream, studying as hard as he could whenever he could, shirking the hedonism of other teenagers his age, to study long and hard, driven by an insatiable desire to ascend the cosmic ladder, dreaming inevitably of his ultimate goal – to become a cosmonaut, and to join his comrades in space in an international mission of exploration and discovery.

By the age of 20 he was well on his way, training hard physically and mentally, his brother didn’t tease him any more, he couldn’t given that Ivan could quite easily beat him to a pulp, and also the fact that women actually did pay attention to him now, attracted to his dreamy nature, inquisitive eyes that widened with wonder whenever he would wax lyrical about space and physics and his strong physical features. He was now at crux of the first step of his journey having just graduated from university with top marks in astroengineering, and hovering over an application to Ruscosmos to train to enter into their cosmonaut training program.

“Do it, press it” teased Masha, his girlfriend of some 2 years sitting by his side, “Da, Da I will I will” he responded with a cheeky grin on his face, before pressing the submit button, and placing his foot on the first rung of that cosmic ladder he dreamed of so often.

He was accepted into the training program on account of his excellent academic ability and passed all the physical checks with ease, enrolled on the training program during which he met the brilliant and fabled cosmonaut Sergei Yesenin, a legend in the space community, having being one of the infamous crew on the first mission to Mars in the year 2040.

Sergei was renowned for having an intense look, and it was said that his eyes could burn into your soul, as if the acrid surface of mars was burrowing into the depths of your being, some even claimed that on Mars he had sold his soul to the devil, but Ivan knew that such urban legends were nonsense.

“Ivan!” Said Sergei, with some annoyance, “You are a good student, but you have to stop idealising space….”

It was Ivan’s first assessment with the great man, and he felt humbled by his presence,

Sergei looked at his with those infamous eyes, a flame flickering somewhere in the distance, “I was just like you as a younger man, full of dreams and wonder, but I tell you my adventurous friend, wonder long enough out there in the darkness of the infinite, and you could come to the conclusion that is all is dust…, including us”

Ivan was utterly perplexed by this statement, and confused and somewhat hurt, but he could recognize the element of truth to it, one had to keep one’s feet on the rung of the ladder, to avoid the long floating away into nothingness.

The years of training passed and Ivan grew close to Sergei, the two bonding over in-depth discussions on astronomy, engineering, art, poetry and literature, and Ivan came to appreciate the steely almost mercurial presence of the man. One night he was invited to Sergei’s quarters, he assumed to have their weekly talk and maybe a little vodka afterwards, a ritual that had by now been ingrained into the schedule. They talked for 2 hours before Sergei said “Is it time?”, and Ivan nodded with enthusiasm as Sergei poured two shots of Vodka, smiling in an almost sinister manner, and chuckling to himself.

An hour maybe had passed, and several vodka shots later, Sergei suddenly had a weary, melancholic look upon his face, it almost seeming to become as dry and barren as that surface of Mars he had placed his foot upon all those years ago.

Sergei looked to Ivan and seemed almost to wince, his face contorting, “Ivan, you know I have always held the greatest respect for your drive, your unending desire to see eternity”

“Da” replied Ivan, curious as to where this was going, “Well my boy, what if I were to tell you there was a way I could make it real?”

“You mean metaphorically I assume” chuckled Ivan, after all they were Russian and they had been drinking vodka, and metaphor was the other art they as a people were known to be well versed in.

Sergei’s eyes blazed with an intensity suddenly like a supernova as he stared directly at Ivan, and bluntly uttered a single word – “No”. Ivan chuckled uneasily this time, as the stare did not break from his eyes, gazing into unknown depths. “Come on Sergei, I think this time we have taken too much, lets retire for the nigg…”

It happened so fast that Ivan barely had time to comprehend what was going on, Sergei lunged at him with incredible speed, his maroon dark red eyes pumping with a terrifying intensity, as he leaped onto Ivan, fangs unsheathed and bit long and hard into his neck, engorging himself on his plasma, to feed his insatiable hunger, the burning within!

Ivan passed out, and then awoke in a haze of confusion to see Sergei sat beside him, his aura glowing like the barren atmosphere of Mars itself, “Drink” he whispered, putting his arm cut and bleeding infront of Ivan, “and my friend, we will see eternity, of this I can promise you…, or do not and die here whimpering like a child, the choice is yours, but know that I at least gave you a choice”. Ivan was confused, his strength wavering, he had to see the stars! He had to get to the top of the ladder, reach that palace in the stars.

He lamented that perhaps dear old Sergei had indeed given his soul to the devil, but the choice he gave him was no choice at all, it was a riddle he could not resist, and with unsettling ease he bit into Sergei’s exposed arm, feeling warm life at last return to his battered, weakened frame, as he submitted to his fate, to become Nosferatu, one of the damned, condemned to wander the world and beyond for eternity. With a nod he stood up, looking to Sergei uttered just these words “I will never forgive you, and yet I can never find the words to thank you enough”

“It is the way for all of us at first, but I will guide you on your journey along this immortal coil” he smiled wryly.

Many years passed, many trails, many errors, many girlfriends (sometimes they would have to be consumed, as Masha was some years ago now), each day Ivan getting closer and closer to his goal, killing other students if they were proving a little ‘too’ good for his liking, his competitive spirit now matched with his ambition and bloodlust proved a deadly meeting.

Until he got his wish and was sent hurtling to the ISS as a Cosmonaut.

And that as they say is that, say sometimes wishes can come true, but not always as you might imagine.

Now Ivan probably some 200 years old, sighed in his metallic cage, surrounded by the remains of his crew – mere dust now in the dark cage that was his life, a miserable rotten creature entombed for eternity in his palace in the sky, all he could do was sigh, he had almost forgotten how to communicate, driven half mad by his unsated blood lust, a skeletal form he possessed now, bone thin and delicate looking, but unquestionably ghoulish.

Dreams do come true, but nightmares do too. The cursed cosmonaut knew it better than all, and would for the eternity of his bitter undead sentence.