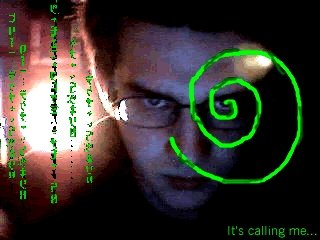 Hello, my eyes are portals [Written before turning 30]

Not the usual kind of God, the kind you see on TV commercials.
I saw the grand picture opening in the skies, I saw a window opening me up into a world beyond intellect,beyond me. Egoloss, an absolute Donnie Darko vision of infinity.

Man I love that film, it meant more to me than words can say, and should.

I think I was Frank in another life, by which I saw myself as Donnie and that’s what I’ve become, A schizophrenic man in a movie theatre, captured forever on screen.

hmm, I thought interesting, Americanisation of the word for a gay person, “not.”

‘I’m English mate, fags are what we smoke”,  watch your language on the server I thought, and shortly after this the word “Motherducker” moved across my lips. I was MrCrispy on Xbox Live and I was excited by Halo. Excited by the idea that maybe technology could bring us together to… kill one another (In a safe manner of course and with the minimum of actual killing involved, the less said about previous N64 007 Goldeneye rivalries from the years before, the better frankly!)

Fag! the boy screeched again down his headphone, squealing like a pig when he laughed.

‘Dude shut the fuck up’ his friend spoke loudly in the background.
“Nigger, Nigger Nigger”
“Fags! Fags! Fags!”
“Nigga Nigga Nigga”
“Faggots, Faggots, Goddamn Faggots”
“What the fuck are you people on about?” I thought

“A Fag is a cigarette” I said.

They put down their headsets and laughed even more, I can’t recall for how long. Shocked at the seemingly foreign language I had uttered to them, which is so often garbled. Motherducker also known as ‘Northern Slang’ for a boy who wants to have sex with his mates mum, I didn’t by the way, in case you were worried, which you’re not, I invented that word, I think?

I’m a man now I guess, 30 coming far too soon, I feel old, washed out and am certainly not bold on Halo servers anymore.

I sometimes look down and sift through copies of old videogames and videos on a computer searching for something resembling truth. Which is sad and could be time spent better getting lost in the eyes of a good woman or something.

I dunno, I mean I am thirty soon, damn, thirty. An actual three and an actual zero, am I where I thought I would be? Duck no…

Motherfuckers the word I use now, and the sacred powerword of motherducker rarely sees the light of day, reality is a bitch and that bitches name is Congleton, the hell where I now live. A Hell ridden with charity shops and Tories, on every corner a blue.

And my own blood runs red.

Sartre said hell is other people;
Given he was French his attitude is surprising, and also wrong. Hell is giving a shit, Hell is giving too much of a shit, hell is giving twenty quid of the money your Dad gave you to a homeless person who then uses it for nefarious purposes, hell is seeing your friends get paranoid out of their face on speed, hell is being ‘a bit’ of a drug addict. And yeah I used the words ‘a bit of’. Because I am sarcastic and middle class, though I’ve always thought of myself as Working Middle Class.

Welcome to hell. Welcome to Congleton. Welcome to my life, there should be a theme song. This would be; Still thinking the bastardisation of our culture won’t abate, Trump will win the election, the pundits will cheer on FOX news, the scaremongering Owls will laugh and the pigs will squeal, power tripping will continue, but you know what, I’m free!

Just need to put that in rap form, and I’m made!

Here’s some poop for you, and by poop I mean truth aimed squarely at American Kids on Halo Servers who are probably much older and wiser dudes now, Do not, I repeat , Do not vote Trump, he appeals to the very worst in the American People. fearmongering and scaremongering, quick to judge and even quicker to impose a heavy fist on those people who are now most at need.

And here’s some more personal perspective: I want to live in a world where gay men aren’t called fags by people who should know better and where we don’t casually toss around the word ‘nigger’ as white people, without an implicit understanding of the power of those words to wound. A world where black people are being needlessly killed by corrupt cops on a regular basis.
Just think how you use language, I’m learning to.

To put this in perspective. My own personal shame was my immature attitude to a certain day in 2001 on the school bus, where I was a dick, and blamed all Muslims for 9/11 in a fashion not dissimilar to a knee jerking up and down quickly. I’ve undone that particular sin, or have in part by having a conversation with a brilliant Muslim during my time being a bit poor and losing myself in South London. Tehmoor helped shed some particular illusions I had about how reason and Faith can live side by side, to how logic and spirit can hold hands,  how we can avoid more conflict simply by recognising how similar we really are. That is the way forward, don’t divide the word further, bring it closer together, be the “world child, form the circle” as my musical hero Thom Yorke once sang on a dark day. And we must remember that on dark days we must form yet more circles.

Muslims have integrated into British culture, and I myself as a self confessed Pantheist can attest to this from personal experience. Of course ISIS is a creeping and present threat stability,but in the words of the great Charlie Chaplin should we now  ‘hate instead of love?’

You could say, how terrible to utter these words, curious, as if love is some kind of game to be understood, Wittgenstein understood that communication is a kind of game, and I guess it drove him a bit doolally in the end.

Not the love part though I’m sure, that’s the good stuff I don’t understand yet,  I mean the ways human beings play games with language, which seems to me the cheapest game. I’m a white liar, the kind of liar who finds it hard to admit to himself when he’s wrong, like all men at times. But you know what, I’m learning and I’m evolving growing as a human now, not as a kid on Xbox, shouting strange insults at 13 year old American Kids because I’m tired of living. I am finding reasons to live.

My life as a 17 year old Stoner, it ended finally in disaster, in a sentence that quite literally causes me pain: Macclesfield Adeplhi Ward, 2 weeks – voluntary patient, cannabis Induced Psychosis, Final Dx to date : Bipolar 1 or classic Manic Depression

In and out of wards till the end of time then?

Na just till I’m 30. I still never judge those who like to “toke” though

My name is Chris Godber and
my current addictions are coffee, smoking and the Internet
because I actually want to live past 30
I’m trying to cut out the last one.